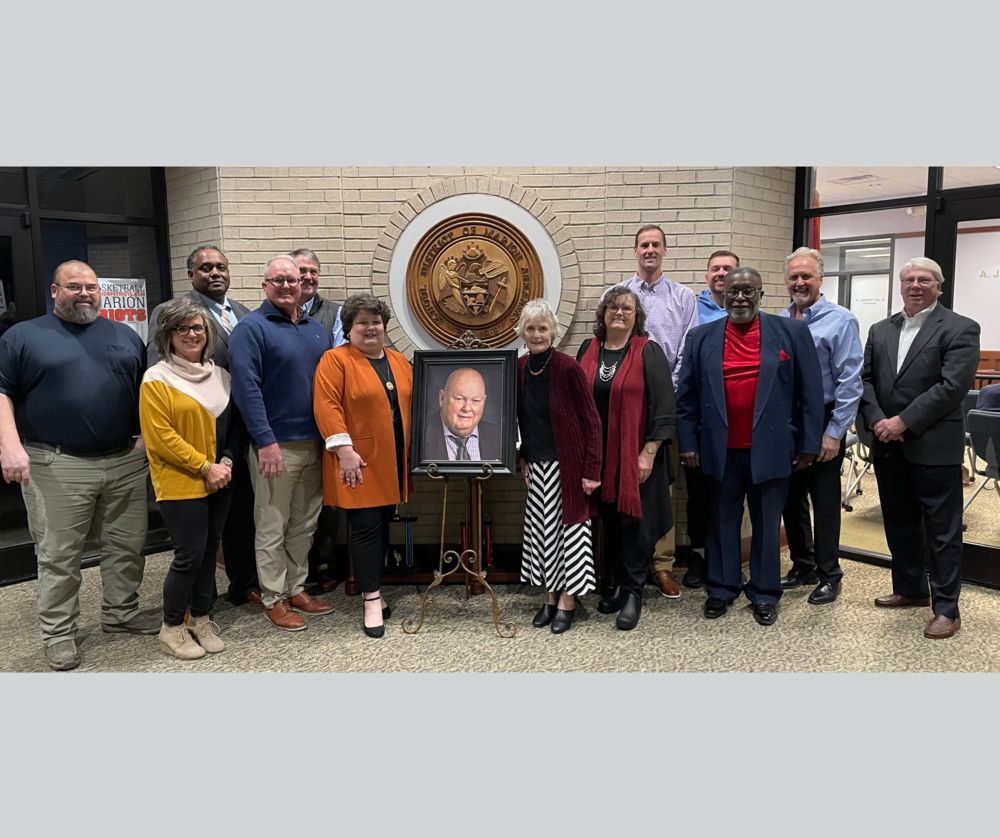 “A. Jan Thomas Boardroom” dedicated by Marion board

Thomas passed away in late 2021. He had been a member of the Marion School Board since 1983, serving as board president since 1985. Thomas was instrumental in the progress the Marion School District made in growing from a small rural school district in the early 1980s to a large modern school district that now covers more than 200 square miles and provides a rigorous education to nearly 4,000 students.

During Thursday’s board meeting, Board President Jeffrey Richardson read the resolution, which acknowledged Thomas’ 36 years as board president, and noted that Thomas’ “tireless leadership, vision, and concern for the students of our community have substantially influenced the growth and impact of Marion School District.”

Thomas’ wife, Fritzi, as well as his two daughters and his son, were present for the dedication. Along with members of the school board, the family posed for a photo with the portrait of Thomas that will now hang in the boardroom.

“The impact Mr. Thomas has had on the Marion School District -- and the Marion community -- cannot be measured,” Fenter said. “In a district that has undergone numerous significant changes over the past several decades -- many of which were potentially traumatic -- Jan Thomas’ leadership was the steady hand that guided the ship. There are simply not enough words to express the contributions Jan Thomas made to our schools and our community.”

Over a career that spanned nearly four decades, Mr. Thomas’ leadership was a driving force in many key initiatives for the Marion School District, including:

Thomas also served as a member of the Arkansas House of Representatives from 1969 to 1971, and in 1978, he was appointed as a U.S. Bankruptcy Trustee for the Eastern District of Arkansas. He is a former deputy city attorney for the city of West Memphis, as well as a former deputy prosecuting attorney for the Second Judicial District. From 2002 until 2007, he was president of the Scouts on Stamps Society International, and in 2014, he received the Legacy Award from the Arkansas Bar Association,

The Marion School District is an innovative and growing district committed to helping every student find their unique path to success in school and in life. With more than 150 years of experience serving families in Crittenden County, the district offers a high school, a junior high, and three award-winning magnet schools. For enrollment information, including information on school choice, visit https://www.msd3.org/ or call 870-739-5100.